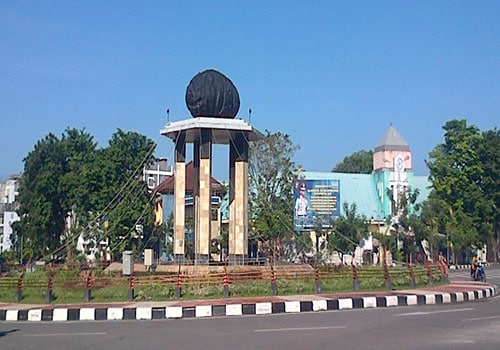 Belitung Island holds many nature tourist spots. It is part of Indonesia Archipelago, after all. It becomes a worthy destination for tourists. Apart from stunning islands and beaches, you can find some nice cities. Tanjung Pandan City is one of them. Many visitors come from Jakarta. It is due to easy accessibility. You can either take an air or sea transport. Not to mention there are many beautiful spots in Tanjung Pandan. It is going to be an unforgettable vacation. On top of that, the foods are great.

The Nuance
When it comes to the atmosphere, Tanjung Pandan City is similar to other cities in Indonesia. However, you can find a unique a roundabout. The street isn’t as crowded as big cities, though. That means you can explore it without suffering traffic jam. Most of the buildings are local stores and houses. There are some hotels, as well. The city is the home of more than 92,000 people. They consist of different races. Also, the city consists of 12 villages.

Exploring Tanjung Pandan City
Another name is a city of trading. You can find an enormous port here. Most of the ships come from Tanjung Priok, Jakarta. The city features a busy harbor called Tanjung Pandan Port. However, many people also call it Laskar Pelangi Port. The city is situated near to the Hanandjoeddin Airport, as well. That means tourists are able to reach Tanjung Pandan easily. Once you arrive at the airport, you can explore the city by public transportation. A rented car is recommended, actually.

The most famous tourist destination in Tanjung Pandan City is Satam Monument. In fact, it becomes the icon of the city. The monument has the color of black. According to the locals, it was the reminiscence of a meteorite. Not to mention many carvers make some souvenirs from that stone. You can find them in local stores. Next, there is Tanjung Pendam Beach. It is famous for its beautiful sunset. Due to its romantic nuance, the beach becomes a favorite place for couples. Moreover, it is located near to Satam Monument. The distance is about 1 km.

In Tanjung Pandan City, you can also reach Tanjung Kelayang Beach. It is a peaceful place. Not to mention it features many beautiful objects like a clear blue sea, big granites, and white sand. On top of that, you can feel the soothing wind. Next favorite tourist spot is Tanjung Tinggi Beach. Laskar Pelangi Film took place in this location, actually. Another interesting place is Tanjung Binga. It is the place for enjoying seafood. Don’t forget to visit the fishing village.

How to Get There
There are two ways. First, it is by sea. From Jakarta, you should head to Tanjung Pandan Port. From here, you can take advantage of public transportation to the main city. The second option is by air. Your destination is Hanandjoeddin Airport. The location is about 15 km from Tanjung Pandan City. From the airport, you can use a taxi or other types of services.