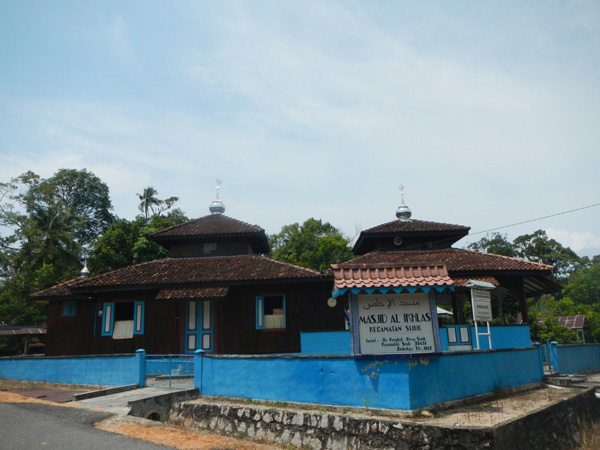 If you are visiting Indonesia, you shouldn’t miss Bangka Belitung Province. It is an opportunity to find unique places and tourist spots. In Sijuk Village, there is a famous mosque. The name is Al-Ikhlas Mosque also known as Sijuk Mosque. The location is near to Sijuk Temple. That means you can visit two interesting places at once. The mosque is situated in the north part of Belitung Island. It has become a worthy historical vacation destination for decades. So, what is so special?

The Nuance
In terms of appearance, it represents a simple and traditional building. The atmosphere is calm. On the front of there were name board “Masjid Sijuk” made by the Department of Culture and Tourism Belitung at that time, which is also marks the Cultural Heritage status for this old mosque. Though, you may find some tin miners nearby. It is because many Sijuk villagers are miners. In front of the mosque, you may see a wooden name plate. It is the primary sign of the mosque. When it comes to painting, it combines different colors like white, blue, and yellow. The mosque is located on the roadside. Tourists won’t be difficult to find it. Even though is adjacent to the road, there aren’t many vehicles passing by.

Exploring
Al-Ikhlas Mosque was built in 1817. Most of the parts are made of wood. The roof has the shape of a pyramid. There are several building parts like pendopo, main building, and Mihrab. The mosque also features a board. It is used to display historical and nearby tourist spots photographs. As a tourist, you can take advantage of the information to explore Sijuk. Though, these photos don’t come with detailed navigation. As an alternative, you can hire a tour guide. Your tour agency will take care of it.

The mosque also holds an interesting history. In fact, it is the oldest mosque in Belitung. According to the rumor, there were ancient mosques in this island. Though, there were no reminiscences of those mosques. For Muslims, you can perform a prayer in Al-Ikhlas Mosque. It can be done during a vacation to Sijuk Village. Like other mosques, it features prayer rugs. There are no special ornaments in it.

The platform is made of wood. It emits traditional and spiritual nuance, though. On the wall, you may find Arabian Letters. When it comes to the flooring, the mosque applies ceramics. Al-Ikhlas Mosque also features an old drum. It is located in the yard. Next to the mosque, you can find a pendopo. The shape is similar to the mosque. Though, it doesn’t feature wooden walls. It becomes a location for relaxation. Here, visitors are allowed to relax. With all these features, Al-Ikhlas Mosque becomes more than a historical building, but it is also a worthy place for tourists.

How to Get There
Al-Ikhlas Mosque is located in Penghulu Street, Sijuk Village. From Tanjung Pandan, you only need to take Sijuk Street. Once you reach Sekolah Street, you should head right. Follow this street until you reach the village. The mosque is situated on the road side, so you won’t miss it. Since it is a long trip, you should have prepared a good vehicle and some refreshments.