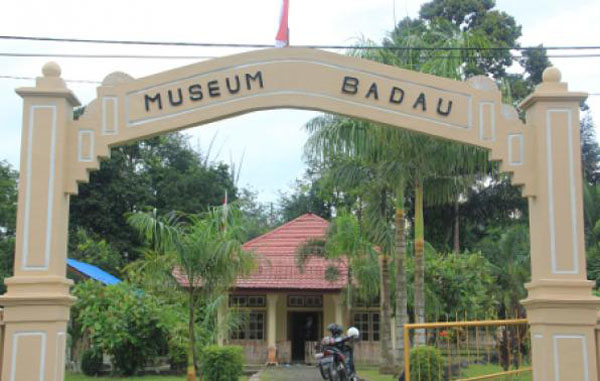 For those who love historical places, Badau Museum should be on your list. It is located in Abdul Rahman Street, Belitung Island. As the name suggests, it is situated in Badau District. It was built to preserve Badau Kingdom’s heritage. That means tourists are able to witness the reminiscences of such monarchy there. You can find old weapons, musical instruments, and much more. The museum opens to public and it is guarded by a keeper. The thing is such keeper has a connection to the Badau Kingdom’s family tree.

The Nuance
Once you reach Badau Museum, you may find a statue of an army. It is holding a spear. This Badau’s army statue becomes a glory symbol of the kingdom. In the southeast part of the museum, you can find old walls. These create a vintage ambiance. In the yard, there is a flagpole. It is installed in front of the museum, as the symbol of nationalism. If you want some information, there is a museum keeper. No worries. He is friendly. With his help, you can explore the museum thoroughly.

Exploring Badau Museum
The most famous item is Berlek 13. It is actually a couple of old spears. According to rumors, each of them has a distinct gender. The locals believe these items are inseparable. There are stored in a cupboard. The keeper applies a special perfume on them. It is said the perfume becomes the nourishment to those spears. Many tourists are also attracted to the magical atmosphere of the museum. The rumor has it. The spears could move by themselves at night. If you try to separate them, they will unite in a magical manner. It’s only a rumor, though.

Apart from historical spears, Badau Museum becomes the home of other weapons like ceremonial knives, swords, and much more. These weapons were used by Badau Army against the Dutch. Next, there are ancient utensils. These were items used during the reign of Badau Kingdom. In the right part of the museum, you can see photographs. Most of them are documentations. You can even learn a family tree of Badau’s King. These include the first king and the latest one.

Badau Museum is open to the public. That means everyone is allowed to enter the museum. The best time to visit is during the holidays. You can meet many people including foreigners. If you come with kids, make sure you watch them well. Don’t let them touch anything! It is because kids can be quite active inside a museum.

How to Get There
Museum Badau is situated in Badau District. From Tanjung Pandan, it takes about 25 minutes. The distance is about 18 km. You only need to follow Sudirman Street and head to Badau Street. If you come from Manggar, it takes up to an hour. For those who come from Gantung, the trip takes about 1 hour and 20 minutes. The museum is situated in the roadside, so you can notice it easily. There is even a gate near to this location.